Jim was in his prime when we went camping. His first camper was a little teardrop affair, with an outdoor kitchen that opened up from the back. There was barely enough room inside for two sleeping bags, plus a little shelf to store things.

Jim with the “Boondock Special.” My 1955 Plymouth is barely visible on the left.

His second camper, the one we took to the West Coast, was a walk-in affair made of fiber board – Masonite. You can see it in the picture to the right.

Before this trip, we spent several weekends at his uncle’s cabin on Lake Metigoshe. Other times we went to nearby campgrounds, and even into Canada to Lake Winnipeg or Kenora, Ontario. Those were great trips, but they were only preparation for the mother of all trips. To the coast! I did have an ulterior motive, which might show up in the letter, or in a future post.

Guy had just graduated from high school and I had a new ’68 Ford Galaxie 500 hardtop with air conditioning, and we also had a leaky, home made travel trailer some 12 to 13 feet in length. When it didn’t leak we affectionately called it the “Boondock Special.” Guy and I had spent months on elaborate plans for a trip to the west coast, camping all the way. 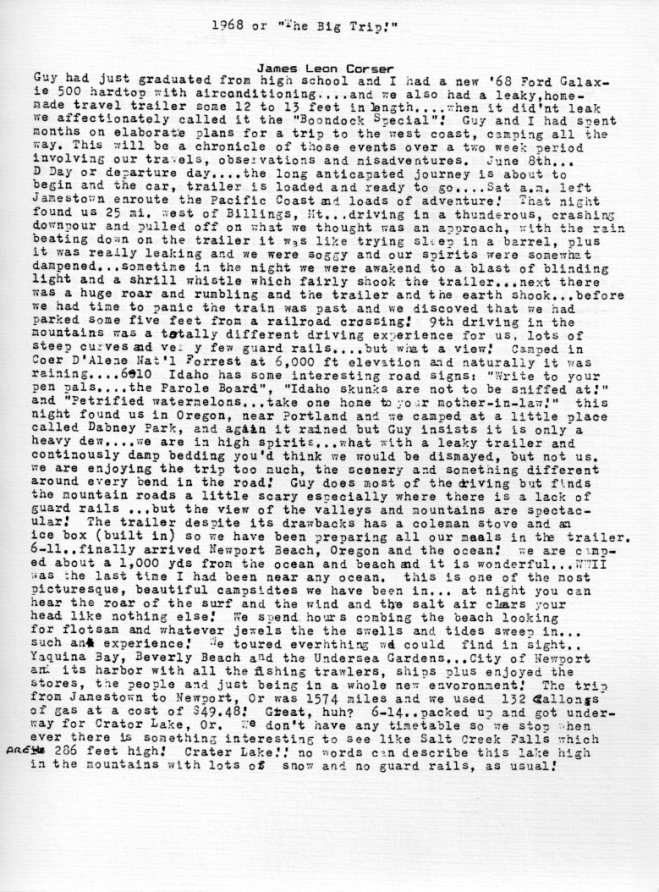 Page one of “The Big Trip”

Page two of “The Big Trip”