There are some stories that just defy comment. Try as I might, nothing comes to mind that adds to this story. 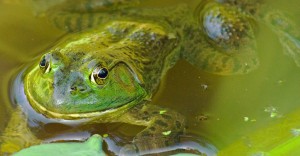 Got to tell you about a fellow in our neighborhood that wanted to be a dentist. I was brought up along the Pipestem creek in Jamestown’s west end and this river had small fish, turtles and crabs and frogs. This kid, who was just a little older than me …

END_OF_DOCUMENT_TOKEN_TO_BE_REPLACED 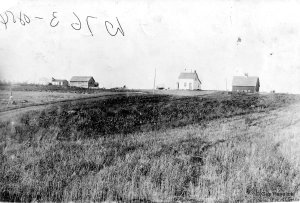 Jim’s interest in automobiles comes through vividly in this letter. They had just lost the farm to the depression and were moving back east. It must have been quite the emotional and economic upheaval, but the focus of this letter seems to be on the 1930 Oldsmobile sedan and the drive to the East Coast.

The bill of sale (photo below) for the farm auction is daunting. Everything from the farm was for sale, including fence posts and flour barrels. The farm itself, in the photo at right, looks a little bleak, nothing like what a farm in our times is, and certainly nothing like what Jim was headed to in Massachusetts. Below is a scan of the back side of the farm picture. It appears to be notes from the agent selling the farm or perhaps the bank. Can you decipher the handwriting?

If you’re following these letters closely, you will notice that they aren’t necessarily in order. I’m not sure if that’s because I scrambled the stack or if Jim just wrote them as memories popped into his mind.

It was March of 1931 and I was in first grade in a small rural school near Flaxton, ND. It was also the same month that Frank and Anna Corser auctioned off the farm, land, buildings, horses, equipment … everything. Before me is an original copy of the auction sale bill …

END_OF_DOCUMENT_TOKEN_TO_BE_REPLACED 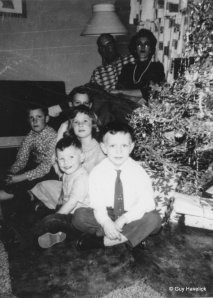 The big thing that makes this Christmas memorable was that Santa showed up. Keep in mind that there were nearly a dozen kids in that little house. All of the kids were in the living room doing something, maybe watching TV or playing games. Who knows where the adults were. We didn’t care.

END_OF_DOCUMENT_TOKEN_TO_BE_REPLACED

Grace’s two brothers were masters of making something useful out of nothing. I got to know Henry quite well, as they lived in the next county over. To his dying day, Henry’s shop was home to some incredible projects made from other peoples’ cast-offs. Apparently, the tradition started early. There’s a lot more to say about Henry in future posts.

Driving thru N D today, August 29, 1992 brings up memories of Henry & Melvin making hay for the cows. They used old car chassis to make jitneys to pull the hay rakes with. They also used them with the hay buckets to push the hay into piles and load the truck with. I think they mowed with the tractor. One year we got a nice new red Farmall tractor. One time when they were mowing in a meadow there was a lots of flame lilies growing + of course got mowed down so Mel brought home a couple buckets full.

END_OF_DOCUMENT_TOKEN_TO_BE_REPLACED

The tradition of the “Dime Store” is one that is firmly planted in my mind, too. The Woolworth store in Jamestown was an important part of my life for years. They sold everything, or so it seemed to this small town boy. They had clothes, gifts, a lunch counter, and even records. I have two distinct memories of the Jamestown Woolworth’s. One was the purchase of an LP, Freak Out, by the Mothers of Invention. Listening to their music now they seem quite tame, but compared to the Top 40 music that was playing on KSJB in those days, Frank Zappa was way out there.

When I was about 10 years old my Dad bought a Ford Turing car. It was black and had to be cranked to start. Many people suffered broken arms trying to start them.

END_OF_DOCUMENT_TOKEN_TO_BE_REPLACED

About a half mile away from the Pink House, down fourth street, across the Pipestem Creek, in a cow pasture, was Cardboard Hill. Cardboard Hill is where we spent most of our time in the winter. Every kid in the neighborhood would make the rounds of Sears, Montgomery Wards, and Dodgson Appliance, looking for refrigerator or stove boxes. Lacking those, we’d accept just about any box large enough to break down and sit on. We’d haul those pieces of cardboard to the top of the snowy hill, pile on as many kids as would fit, then slide down the hill at top speed. No adults were anywhere near. The top of Cardboard Hill was about 70 feet above the flood plain. There was a short flat spot just before the huge (to a seven year old) drop-off into the river. That last steep part was probably only eight or ten feet, but that’s enough to get the heart racing. In summer the hill was just another cow pasture, but in winter after school or on a weekend afternoon it was alive with kids. 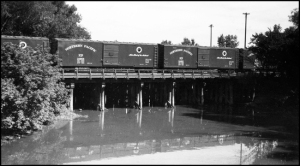 Rail cars on the second street bridge, just downstream from the Pink House.

Another of my favorite places to visit was the railroad. It was only a couple of blocks from our house. I’m told that even as a little boy (maybe four years old) Mom and Dad would occasionally find me sitting on the tracks in the rail yard, watching the switch engine build a train.

Those were the steam days, so there was a water tower and a coal loading station across the street from the “Beanery.” That’s where the crews had breakfast while waiting for the engines to be fired up and the trains to be assembled. It was always buzzing with working men and great smells. END_OF_DOCUMENT_TOKEN_TO_BE_REPLACED 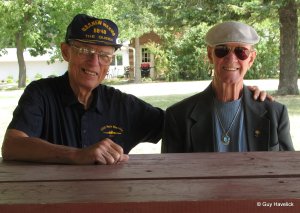 Bill and Jim in July, 2006, reminiscing about the war.

A couple of days ago I posted a letter from Jim about him volunteering for the Navy. He related that after Pearl Harbor he was assigned to the USS New Mexico (BB-40). From then he skips over the entire war, not telling us some of the most harrowing tales of the South Pacific.

There are hints, but most of the stories are missing. He does mention that one of his duties was far below decks, handling the huge bags of gun powder. He told me what each bag weighed, and I wish I could remember, but it was close to a hundred pounds. Jim was a small man, and only seventeen at the time. There might have been as much gun powder as there was Jim! He was doing his job, far below decks, always in danger of explosion, in tropical heat. My claustrophobic self cannot, does not want, to imagine being in that hell hole. Fortunately, Jim was able to wrangle a promotion to the bridge working navigation.

Beginning around the year 2000 Jim started visiting a war buddy of his in Clear Lake, Iowa. His name was Bill. They served together on the bridge of the New Mexico and had a lot of shared stories. The most dramatic was the one in the video below. There is more information about the attack on Wikipedia.

END_OF_DOCUMENT_TOKEN_TO_BE_REPLACED 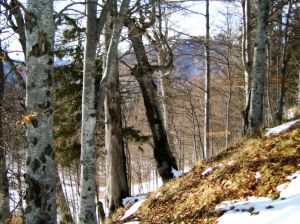 A quiet hillside, similar to the one in southwest Jamestown.

This is another example of a similarity between Louie’s childhood and mine. In this letter he describes the woods across the creek from his house and how he’d wander about, looking and listening. His stomping grounds weren’t more than a couple hundred yards from the woods where Nathan and I built a “fort” and went sledding in the winter. We spent a lot of time in those woods, exploring, playing, and listening to life.

The last time I was in Jamestown, North Dakota I had some time to see the places I would just sit and listen and look while I was just a little fella.

I would go over into the woods across the creek from my home, sit down and admire the trees. Funny how you could walk past them and never notice that each one grows differently – branches take off in different directions as if they were looking for a path to see the world in a different way.

END_OF_DOCUMENT_TOKEN_TO_BE_REPLACED 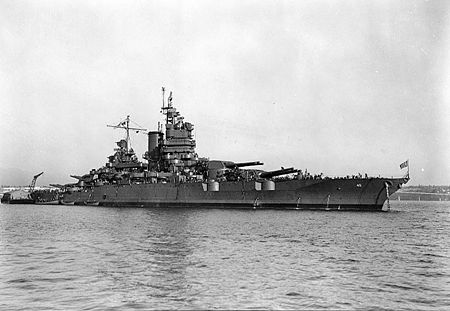 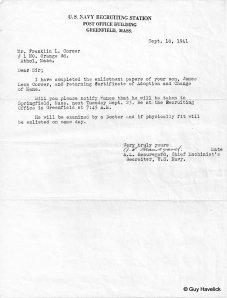 When Jim was seventeen in 1941 the world was quite different from the world I occupied thirty years later as an (about) 17 year old. Hitler was running roughshod across Europe during Jim’s youth. Brezhnev was the evil dictator in my time, and it was Viet Nam, not Europe. Jim volunteered for the Navy and I avoided the draft with a combination of college and good luck. Volunteered may be a misnomer.

The war played a significant role in Lucy’s life, too. The attack on Pearl Harbor was the turning point in her life. Louie and Grace were a little too young to be effected directly. Louie’s older brother went to war in Europe, which did change how Louie handled the Korean War, but more on that later.

After enlisting, Jim served on the battleship USS New Mexico. While Jim did tell me a little of his experiences, he was reluctant to share many stories of his escapades in the Pacific. These letters contain almost all of what he told me about his life in the service during WWII. In his later years he and his friend Bill from Iowa did share some with me. In a future post, I will share a video of them telling some of their more harrowing experiences.

Since this year is the 50th anniversary of the attack on Pearl Harbor by the Japanese Imperial Navy, it also coincides with my 50th anniversary. For on Sept. 23, 1941 I enlisted in the US Navy at Greenfield, Mass. More by accident than by choice. I was 17, an innocent, naive, know it all, smart-mouth kid. With no skills. Jobs were scarce, especially for a kid my age …

END_OF_DOCUMENT_TOKEN_TO_BE_REPLACED 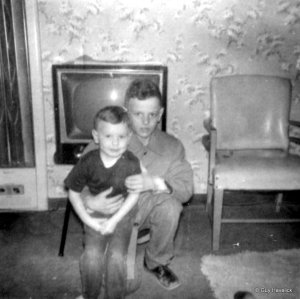 Not exactly sure which of us is in this picture, but that’s the TV !

Birthdays must not have been a big deal when I was a kid. I only remember one, and what’s memorable was not the party. We had just gotten a TV set and I was much more interested in watching Saturday morning cartoons than eating some cake.

TV was a big deal in 1959. Having one in our house was a big deal, too! Prior to our getting that set I had to go across the street to watch cartoons. Thinking about them now, the picture was nothing like we have today, it was snowy and distorted, and only black and white. Actually shades of grey, less than fifty shades of grey. The content wasn’t all that good, either. My favorites were Mighty Mouse, Popeye, and Woody Wooden Pecker. That’s what I called him, much to the amusement of my mother and grand mother.

Woody’s show is what I wanted to watch that morning, so we all took a break from the cake and watched TV for a while. (There’s a You Tube video of an old Woody Wood Pecker show below the fold.)