After WWII Jim spent a couple of hitches in the Navy as he tried to figure out what to do with his life. For one of those enlistments he toured the Mediterranean Sea. He never shared much about this tour, nor any of his Navy experiences. What little he told about the war in the Pacific led me to believe those were tough times. He also spent time in the US South doing ordnance disposal, that was dull and dreary. His time touring the Mediterranean was different!

There were no specific stories, just a few hints here and there. This was the tour of a lifetime. These days college age people take a year off to “find themselves” in Europe or Asia. Jim found himself and adventure in Southern Europe. He seemed most proud of a Longines watch he purchased somewhere in France. I still wear that watch. It’s beautiful, but it’s quite fragile and doesn’t keep very good time.

Jim sent many postcards to a friend in South Dakota from most of the ports he visited, including a brief synopsis of his shore time adventures with banalities about the weather and inquiries about what was happening back in the states.

Even better than the post cards were the entries from his diaries of his tours of the Mediterranean Sea. I’ve included his notes from the 1952 liberty he describes in this letter. (Note that Jim’s letter says 1953 … that’s an error.)

The “Vesparis” was a truly beautiful yacht, a sleek, mahogany hulled 72 foot ketch rigged sailing yacht! She was moored at one of the quays in Golfe Juan harbor, France, on the Mediterranean Sea. …

Jim kept a diary for his years in the Navy after WWII. Here’s a page from that diary. 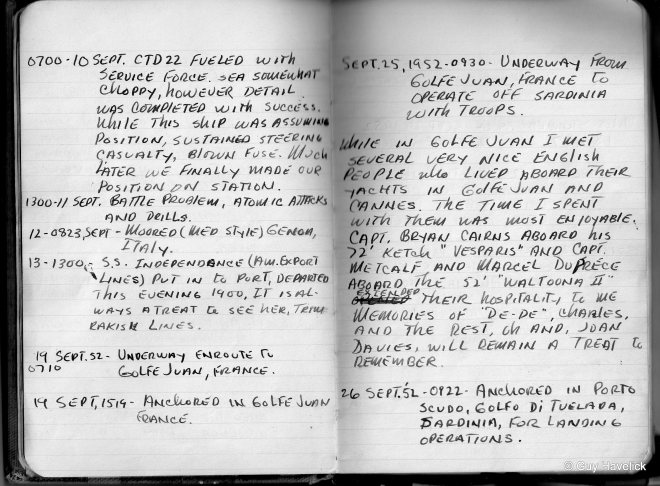