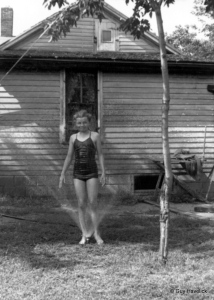 Dorothy in the back yard

Judy and I have always been cat people, so what Louie tells is in this letter feels good. This story isn’t as dramatic as the last couple, but it shows how Louie could take the simplest of life’s stories and make you smile. I still love smiling when reading his stories, and I miss hearing him tell those stories.

When Dorothy and I were still in grade school, our Mother had a live-in alarm clock for us. This alarm was called “Tommy.” He was an angora cat and to me, at that age, he was as large as a tiger.

He was allowed in the house but only in the kitchen area and the basement. When it was time to get Dot and I up and ready for school Mom would open up the basement trap door and tell Tommy to get the kids up. He would run into the bedroom and hop on the bed, crawl under the covers and run around under them right at our feet. I’ll tell you that will wake you up in a hurry. We didn’t have a tiger in the tank, but sure had one in the bed.

He knew when I was coming home from school, just like he had a built in alarm clock. In front of the house was a fence with the posts being big enough for a cat to sit on awaiting his victim.

When I came by he would jump on my shoulder and ride into the house with me, then there would be a play period in my bedroom until Mom caught us and Tommy was run out of the jungle by the great white hunter (Mom).

We never had any more pets after that but the people on either side of my Mothers’ home had dogs and cats.

On the east side, they had a dumb dog, on the west side some cats. The dog hated cats and always chased them when they wandered into Mothers yard. Of course the cat run for the fence between his home and Moms’.

The cat run through a hole in the fence and the dumb dog would go as far as the hole and stick his nose through the hole. You guessed it, the cat stopped just on the other side of the hole and when that pretty we nose showed through the hole, it would rake that nose with some very sharp claws.

As far as I know that game would still be going on as the dog never learned and the car really enjoyed it but mother nature took over and sent them to the happy hunting ground. Maybe that is the “Happy Nose Raking Ground” …