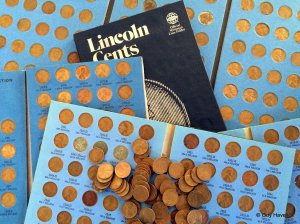 Some of Louie’s pennies

Louie loved coin collecting. I’ve always found it mildly interesting, but rarely to the degree that others have enjoyed. Since I love people energized by something, there have been two situations where coin collecting became a focused activity.

In college my roommate was a hard-core penny collector. Collectors like him are why you never see wheat back pennies these days. His idea for a great weekend was to pick up dozens of rolls of pennies from the bank and spend a Saturday sorting through them, looking for any older than 1958. When we were in college, there were still plenty of them. By plenty I mean one penny in every other roll of fifty coins.

We each would sit on our beds in the dorm room, listen to rock music, unwrap a roll, and carefully check each penny to see what was on the back. If it was one of the glorious old coins, we’d check the date, announce it and add the penny to our stash. Best of all was when we’d find one of the 1943 steel pennies.

But you wanted to hear about Louie. He loved coins. After his terminal diagnosis he invited us four boys to his place to divide up his coin collection. None of us were terribly excited about the opportunity, but his joy in sharing his valuable collection was infectious. It was a huge collection, with lots of pennies, plenty of mint sets, currency, and far too many commemorative coins. It took most of an afternoon for the four of us to sort through all the money. My take was one large Rubbermaid tote full of coins and currency.

I gave many of the coins to the grand children for their amusement, but there are plenty of coins and notes left. On occasion I’ve looked on eBay to see the value of each item, but most of them are pretty worthless. Even the one coin that’s worth several hundred dollars resists my thoughts about selling. I just can’t bring myself to sell Louie’s coin collection.

Because once I did.

When I was a kid, maybe twelve or thirteen, Louie would bring me coins, or send me some especially interesting samples. During his rare visits we’d look at the coins and ooh and ah about them. He loved those coins, and I enjoyed doing something with him. Then I discovered the Blue Book of coins. A list of prices. These coins had real value! Who knew? Now I did.

Like any teenager, I had little money and no sense of value. One day I decided I needed money for something. Something terribly important. Haroldson Office Supply had a coin collecting section where I found the coin price book. The guy behind the counter was more than willing to take a little boy’s collection off his hands. For a small sum. Very small. The collection was gone.

The next time Louie came to town he learned of my indiscretion. The coins were gone. He was disappointed. There were no repercussions, no punishments, but no more gifts of coins and happy times looking at what he had brought home this time. I was disappointed.

That may have been the last time I went into Haroldson’s store. Fortunately there was another office supply store in town, Cal’s. That’s where I got the supplies to publish the analyst, and where I met Jim. Those are two stories for another day.

This is the kind of penny we were looking for. Save one for me, eh?