The GI Bill yielded one of the best things that ever happened in Jim’s life. A college education. He started at the North Dakota School of Forestry in Bottineau, ND. Bottineau is a small town in far north central North Dakota. Today the population is barely over 2,300 people. It couldn’t have been much larger in 1950 when Jim was there.

In this letter Jim describes a college outing when one of his favorite professors takes a group of students to the Fort Berthold Reservation to excavate an Indian burial mound. The experience influenced Jim’s thoughts for years afterwards.

I grew up in North Dakota, in Jamestown, and had little interaction with Native Americans. Last fall I read a moving book by Kent Nerburn, Neither Wolf Nor Dog. After finishing the book I had to visit the Wounded Knee Memorial in western South Dakota. Perhaps Jim’s experience on the reservation meant as much to him as my visit to Wounded Knee in the spring of 2015. The history of the conflict between Native Americans and the White Man is a gut wrenching narrative, especially when considered from the Native view.

When we arrived at the memorial a young Native man approached us with a goal of selling some trinkets. His life and culture had obviously been crushed by the poverty, inequality, and subjugation of life on the reservation. The Federal Governments goal in the nineteenth century was to obliterate the native culture. Walking around the Wounded Knee Memorial reminded me that the government almost won. Nothing about the memorial, the cemetery, the reservation, or even that corner of the state instilled anything but despair.

I hope that the work of people like Ed Milligan and his progeny can restore the pride of the Native American culture. They need to see the strength and wonder of their culture. Without them we would all be diminished.

Enough of my rambling, let’s get back to Jim’s story.

Edward A. Milligan was an instructor at the North Dakota School of Forestry, Bottineau, (which is now endowed with the imposing title of: N.D.S.U. Bottineau Branch and Institute of Forestry!) This small, obscure junior college offered a variety of courses; Forestry, Commerce, Engineering, Liberal Arts, Greenhouse, Pre-Law, Pre-Med, Agriculture and last but not least, Horticulture!

In the fall of 1950 the college had an enrollment of …

END_OF_DOCUMENT_TOKEN_TO_BE_REPLACED

Last week we were at Eagle Lake for our annual summer vacation. It’s one of our top vacation spots every year.

Both Judy and I have fond memories of vacations at the lake long before meeting each other. She would travel with Betty and Howard and their kids to Minnesota for a holiday, while Jim and I would head to Lake Metigoshie for a weekend of camping and tooling around the lake on the pontoon boat. After a couple of false starts, Judy and I discovered Eagle Bay Lodge and started a tradition that has done us well for a long time. We don’t go every year, but often enough to feel at home and relaxed there.

In the late eighties we started having other people stay at the lake for several days during the week. Lucy was always there, sometimes her friend Judy would be with us for a few days. Jim started coming down during that time, too. END_OF_DOCUMENT_TOKEN_TO_BE_REPLACED

Grace is in the back row, third from the left.

The changes over the last one hundred years amaze me. Then this letter shows up and twists my understanding even further up the amazement scale. A general observation that things change is pretty banal. Once I hear about a specific change  in detail, in a way that I can relate to, it gets personal. In this letter Grace tells us about the one room school-house on the prairie. They were all over North Dakota in the nineteen thirties. Did I say one room?

Then there was the school-house Grace went to. Two rooms. Maybe you can detect a little pride in her description of the school building and grounds. That school yard had everything a school girl would want, including the flowers that Grace described in another letter.

She didn’t describe the interior of the classroom. That’s something I’d love to hear more about. Last summer during the local Irish Fest at the History Center Judy and I attended a talk about bodhráns. The talk was in the one room school-house on the center grounds. Wooden desks nailed to the floor. A world/USA map hanging from the wall. A chalk board on the front wall, next to the American flag. A pot-bellied stove and a table in the front for the teacher and you’ve got it covered.

Compare that to school rooms today, with smart boards and iPads everywhere. The kids have a cafeteria, gymnasium, library and much more. And we still think it’s not enough!

Our schoolhouse was probably one of the biggest in N. Dak. The pioneers from two townships had gone together and built one with two rooms instead of the conventional one room you see all over the midwest. END_OF_DOCUMENT_TOKEN_TO_BE_REPLACED 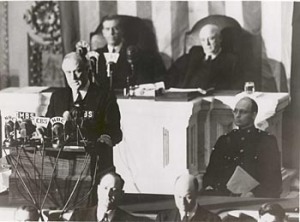 FDR delivers the declaration of war request to congress.

World War in 1941 was not the same as the relatively little dust up in the Middle East in my lifetime.

In 1990 our president didn’t ask us for any sacrifices. In the forties everyone gave up something, often they gave up a lot. Lucy talks about some of the privations they endured. There was only one of them that I can really relate to.

In 1973, during the Vietnam war, I was called up for a draft physical. We stood around in the Fargo Army physical exam facility all day, just like Ken did in Lucy’s letter. Fortunately for me the outcome was a little different. I plan to write an entire story about that day in the near future. Let’s get back to the forties.

Being newly married, then have the threat of war was not easy to deal with. We would have to leave our little house – by the way – Ken was working on a car at the garage and a customer stepped on the starter and Ken lost the end of his finger. The insurance from that paid for our house – along with overhauling cars in the yard.

END_OF_DOCUMENT_TOKEN_TO_BE_REPLACED

This is the interior of the 1955 Plymouth. The car is not what held my interest that day.

The old Plymouth was quite the car. It had a little V-8 that I thought could take on the world. The two-speed automatic had a shifter on the dash-board, one of the few cars in town that did that. I put hundreds, perhaps thousands of miles on that car. Right after learning to drive I disappeared from the house to spend the nights cruising main.

On one particular trip to Jamestown College, perhaps to see a play, perhaps just cruising somewhere, the parking was exceptionally crowded. Cars were everywhere, on the sidewalk, double parked, everywhere. That didn’t stop me, so I tried to get through. Not knowing exactly how wide or long the car was, the rear passenger door found the bumper of another car. Naturally when my mother saw that crease several days later I claimed to know nothing, saying that it must have happened when she was downtown that day. That was an easy one to remember when Lon started driving and apparently had the same experience at Barlow’s. It is a family tradition. END_OF_DOCUMENT_TOKEN_TO_BE_REPLACED

Louie doesn’t say how old he was when they collected over-ripe tomatoes. Let’s imagine nine or ten. Then imagine that he’s your son. I’d be unhappy if my ten-year old boy was pulling this stunt. Louie’s mother was a hard-core Baptist who shouldn’t have put up with such shenanigans. Maybe things are different when dealing with the tenth child? The oldest had finished school and moved far from home. This kid was just out having fun with the neighbor kids.

The good news in these stories, so far, is that Louie is never the one caught. That will change as he ages.

During the fall of the year and during the evening hours we had a garden raiding gang that collected over ripe tomatoes.

END_OF_DOCUMENT_TOKEN_TO_BE_REPLACED

Similar to the Piper PA11 Jim describes in this letter. (Photo credit below)

From many of Jim’s prior letters you’ve learned that Jim didn’t usually share much about his early life before writing these letters. There was one exception. Crop spraying with Ben. Nothing in Jim’s life beat that flight.

In twentieth-century North Dakota most people were familiar with crop spraying. Now that I live in the city, infrequently getting into the country, I don’t see many of those little aircraft. Even in the country it’s hard to spot them. They fly low. They fly fast. They hide behind the barn, behind the trees. They swoop, as Jim says. I love watching them.

Don’t make me ride in one.

Every now and then when I was in high school Jim would let me tag along with him and Don Cooper on a flight somewhere for Credit Union business. They’d rent a small plane from Ben (the same Ben in the story below)  and we’d be off to Devils Lake or Fargo. Once in a great while they’d let me sit in front and even try to fly in a straight line. (I couldn’t.)

They’d let me fly in front because their experience with me in the back seat was uncomfortable at best. Airsickness in a tiny plane, especially while wearing a furry winter jacket, is not a pleasant thing. The owner had to hose down the interior.

I have to swallow hard just writing about that experience. Let’s get back to Jim’s story. He loved flying.

Most everyone is familiar with serial crop spraying. How many times have you driven along a highway on a summers day and suddenly seen that small plane swooping down so low on a field that it seems the aircrafts wheels must be brushing the tops of the grain. This is a daring, often dangerous way to make a living. END_OF_DOCUMENT_TOKEN_TO_BE_REPLACED

Tell me another story, Grandpa Guy
Create a free website or blog at WordPress.com.