Jim opens this letter by telling us about the photos he had sent to his mother, and how his step-father had been sending pictures for years. There must have been at least a dozen or more of those pictures, but none of them made it to me. Jim’s photo albums have only a handful of pictures of Jim as a child.

In this letter Jim describes his change from a lost and lonely WWII veteran to the family member who finally came home. Now he belonged. The farm was the root of Jim’s life. His love of the farm and his parents was clear to me, even when I was a rambunctious teenager. This letter cements that feeling.

I wish there were photos of those reunions.

The attached photo is from the pages of Jim’s album that focuses on the middle fifties, at least six years after the homecoming. Jim (partially obscured) and his mother are in the back row, far right. Einar is in the back row, framed by the window. I can only guess at who the others are, but the “matriarch” in the center, wearing a black dress, is probably Grandma Cora. I’d love to hear stories from each of those people. The young people look happy and playful; the old men look like their stories are a little more serious.

After the third day of my arrival at the Steads, Mother and Einar returned from Inkster. They didn’t stop at their farm but drove straight here. During the past few years we had been writing to each other and enclosing pictures. Not only that, long before I knew I was adopted Dad had been sending pictures from my earliest years so she was somewhat prepared for this meeting as was I. Nervousness overtook me when their pickup truck drove in to the yard amidst barking dogs and suddenly … 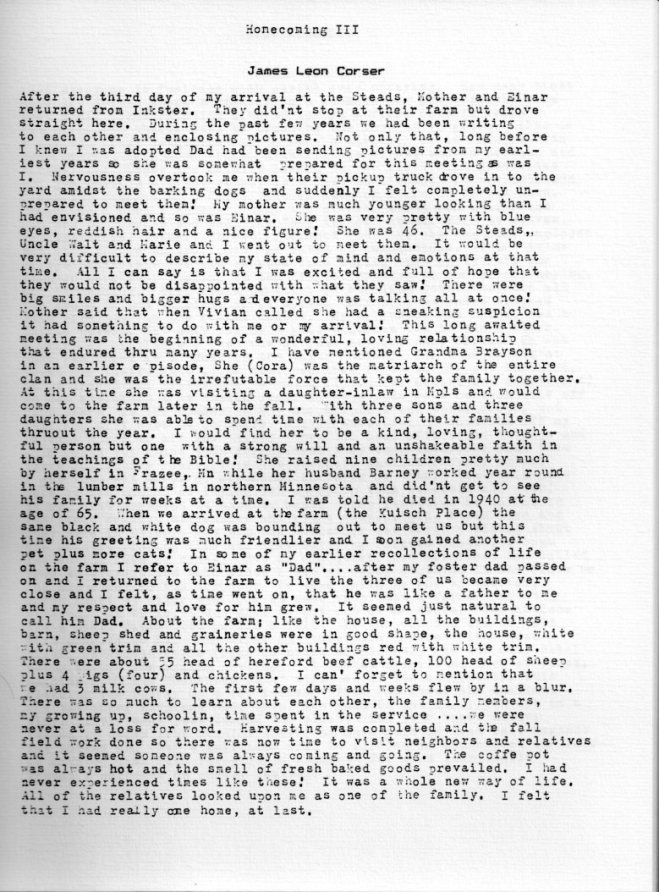