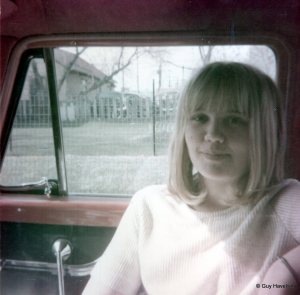 This is the interior of the 1955 Plymouth. The car is not what held my interest that day.

The old Plymouth was quite the car. It had a little V-8 that I thought could take on the world. The two-speed automatic had a shifter on the dash-board, one of the few cars in town that did that. I put hundreds, perhaps thousands of miles on that car. Right after learning to drive I disappeared from the house to spend the nights cruising main.

On one particular trip to Jamestown College, perhaps to see a play, perhaps just cruising somewhere, the parking was exceptionally crowded. Cars were everywhere, on the sidewalk, double parked, everywhere. That didn’t stop me, so I tried to get through. Not knowing exactly how wide or long the car was, the rear passenger door found the bumper of another car. Naturally when my mother saw that crease several days later I claimed to know nothing, saying that it must have happened when she was downtown that day. That was an easy one to remember when Lon started driving and apparently had the same experience at Barlow’s. It is a family tradition.

My buddies and I would “tool Main” for hours every Friday or Saturday evening. This was before I met Cathy. (More about that later.) We would drive from the A&W on the Southeast side of town to the Mobil station at the north end of First Avenue. After a quick loop around the block, we’d head for the A&W. Rinse. Repeat. Not many kids cruise Broadway in Rochester. The police considered it a problem in the mid-seventies, but after the gas crises, the issue went away.

Occasionally we’d actually stop at the A&W for snacks and drinks. We loved Bug Juice. It could have been the flavor, the color, or just the name. Just asking for Bug Juice got us teenagers giggling. A&W was a classic drive in, with car hops bringing food out to hang on the mostly lowered window. With four or more people in the car we enjoyed every minute.

What’s a Bug Juice you ask? Half root beer and half orange soda. I haven’t had one for years, but the memory is still sweet.

Why can’t I remember people’s names? There was one guy who lived at the top of Hospital Hill in those apartments, the name of which escapes me. He was a real goof ball, of the dangerous variety. One time he was riding shotgun, reached over, grabbed the keys out of the ignition, turning off the engine, and tossing the keys out the window. On another run, he grabbed the shifter and threw the automatic into reverse while we were going about twenty. I don’t know why there weren’t transmission parts lying on the street that afternoon.

The second accident was with the same ’55 Plymouth. Cathy and I were going ice skating one wintry Saturday afternoon. She had no interest in going, didn’t want to be there, thought it was too cold, figured that her ankles would not hold up, etc.

I took the long way through Klaus Park, wanting to see what the old swimming hole looked like. It seemed that almost nobody else ever took that route, and since it had just turned cold after a warm snow fall there were some pretty fantastic ruts in the snow that had turned to ice. As a plucky sixteen year old though, it didn’t bother me a bit. I could do this. Then I lost control, the car jumped out of the rut and hit a steel and concrete fence post. It bent the bumper, the fender, and put a neat hole in the radiator. I had the car towed to the Standard station by our house on fourth avenue for repair. The park department repaired the broken cable between the fence posts with a clamp that stayed there for years and years. In fact, that fence repair may be visible today!

Shortly after that incident my Grandmother bought a newer car. More about that later.