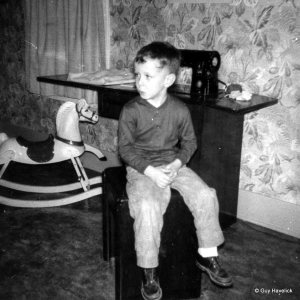 Linn with Grace’s sewing machine at the Pink House.

Sewing machines were a staple in our house when I was young. Our mother was always sewing something. She became quite the seamstress, eventually hanging out a shingle and doing dress making full-time for people in Jamestown. There aren’t many tailors who will take on the task of sewing a man’s shirt or suit jacket from scratch, but Grace could do it. I remember several shirts that she sewed for me.

When she remarried in 1966 the man she chose, Norris, had a hobby of servicing and restoring sewing machines. There’s an ancient Singer machine in the closet of my office to show for it. The shop in Grace’s house on Lamar St. had dozens of machines that Norris was working on.

This letter is my favorite of all those Grace wrote to me. In it she mentions her passion, sewing, my favorite aunt’s passion, reading, and she describes the process of making a dress. She sewed a dress by herself, in the farm house … well, maybe you should read the letter and look at the photo below.

In the photo, my grand daughter Audrey, who just turned eight a couple of weeks before the picture was taken, is wearing the dress sewn by her great grandmother Grace when she was about the same age.

I started learning to sew when I was around six years old. The old treadle machine was perfect for a little kid to sew on as it went quite slow.

I remember sewing things like hemming dishtowels and simple straight seams on things mama would be making.

By the time I made my first dress I was pretty well acquainted with the machine and what the pieces of a garment looked like before being sewed. 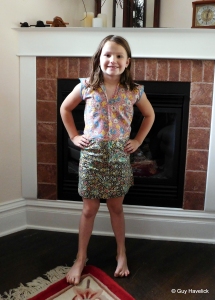 Esther + I were home alone the day I ventured making a dress. She liked to read so she didn’t pay any attention to me working diligently behind the secretary desk in the corner on the floor cutting my material. I sewed strips of fabric together to make large enough pieces and then cut them into shape + made my dress. It is of course very simple but I must’ve been only 7 or 8 at the time.

The top of the dress is tan + white with flowers + the skirt is black background with flowers. Blue bias tape around the armholes + I hemmed it on the machine. I know all this for sure because I still have the dress!! 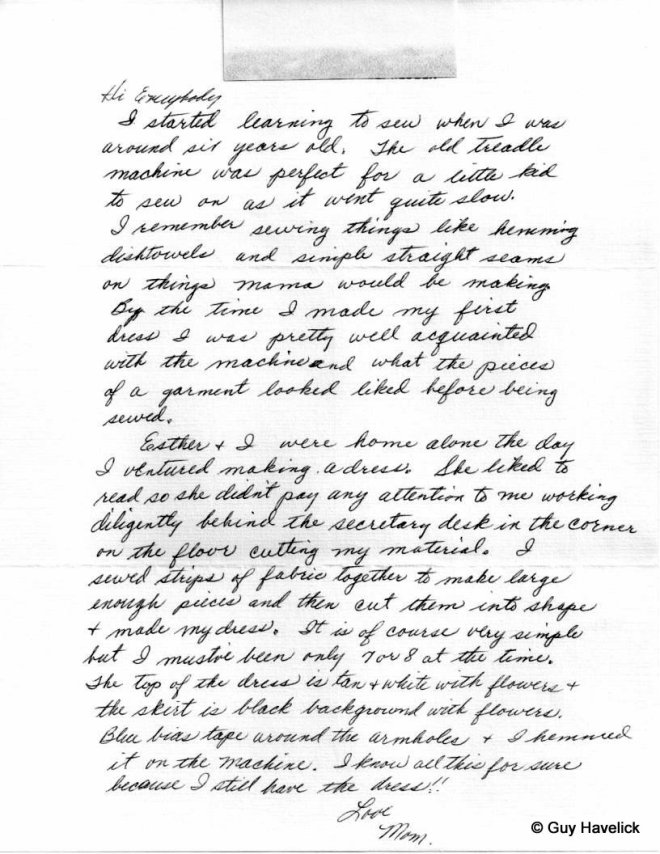