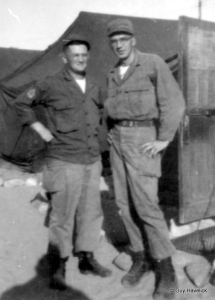 Louie (r) and friend in Korea

For twenty-some years, and even beyond, one of my favorite television shows was M*A*S*H. I still enjoy watching reruns. Some episodes moved me to tears, others have me giggling still. My favorite line is Col. Potter saying “Not enough O’s in ‘smooth’ to describe this” as he describes some Scotch whisky in episode Z-419. The series takes place in the Police Action in Korea that Louie describes in this letter.

One truth of war and the television series is the mixture of pathos and humor. Louie’s story reads like a M*A*S*H script. I laughed at the conclusion, until I realized what had really happened.

Back in 1952 I had the honor of being with, or should I say, a member of the United Nations who were engaged in a “Police Action” against the Communist of North Korea.

Sometime in the summer months the whole United Nations armies were short of ammunition and were prohibited from firing a shot at the enemy unless they were being attacked.