Riders on a later TTT

What is it about the open road that calls to a young man? Back in 1871 Horace Greeley told young men to go west. The west just isn’t what Mr Greeley thought. In the 1980s we decided to go with the wind. Two of my buddies were hard-core bikers, the non-motorized version. Dan was in the Sierra Club and organized their annual Century Ride, a one hundred mile race around Rochester. Don just loved to ride, rode to work on a regular basis, and took bicycle vacations all over the country. I just liked to ride casually, and would go along on some rides just to be with my buddies.

One of the big deals was the Zumbro Zig Zag, a triathlon that started just north of town in Zumbro Falls. That’s a story for another day. This story is about the Tri County Tailwind Tours. It’s a story that runs several years and hundreds of miles.

The story starts small, as you will see from the account of the first tailwind tour below. The tours became a study in paradoxes. We weren’t big on organization, but it took a bit of organizing to pull off these rides. The first rides were small and informal, but they grew to include well over a dozen riders, several support vehicles, and a major party at the end of the day.

The concept was simple and remarkable. A group of us guys would meet at a prearranged time and place, ride with the wind until we got tired, then we’d call home and the wives (only men went on this ride) would drive out to pick us up. Everyone would then meet at the house for pizza and beer. The families who weren’t on pickup duty would come to the party, too.

Some of the traditions took years to develop, others, like using Dan’s kerchief to decide wind direction, seemed predestined.

Two weeks before the ride the core team; Dan, Don, Guy and maybe two or three others; would meet at a local watering hole to plan the ride. There wasn’t much to plan, as this year’s ride was a lot like last year’s. The dates were set by tradition, the route was up to the weather gods. About all we had to do was to decide who would host the after-party and who could pick us up.

The rides were highly informal, with strict boundaries. We would ride to a significant highway junction, then Dan would check the wind direction. After a lengthy debate about which way the wind was blowing we’d all take off along the road with the wind at our back. One discovery was that the wind in Olmsted County is predictable. Never from the north-east, usually from the west. This is easily demonstrated by the destinations, all down wind, usually Red Wing or Rushford, never southwest of Rochester.

Bicycling has changed a lot since the 1980s. On our first ride nobody wore a helmet. The second year one or two of the guys did. By the last ride, every rider wore a helmet. Even though we never had a real accident on a TTT ride, we all had experienced, seen, or heard of a bike injury.

There were no bike trails when we started, so all the routes were on county highways. These days when I drive down those same county roads I marvel at the amount of traffic on them. On TTT rides we could ride two and three abreast down the highway, only occasionally calling out “Car!” to alert the others that traffic was approaching from the rear.

Two or three bikers riding together like that made for some good discussion. In the ten or fifteen minutes between cars we could cover the necessary small talk, get into a serious topic, or realize that this was a person with whom you did not want to talk. After the cars went by we could easily change-up the riding partners and start a new discussion, or stick with the earlier rider to continue the interesting debate.

Rides started at seven AM at the Silver Lake fire station. Rain or shine. Rain usually meant a shorter ride, like the forty mile ride to Owatonna. That was not a good day. Stiff winds meant a long ride, like the ninety mile ride to Wells. For most rides we stopped for breakfast at the first opportunity. Pine Island or Mantorville were popular stops. By noon we were hungry and needed lunch. After lunch we rode a little slower and often quit by three PM.

As Dan, Don, and I sat on the grass in Northfield after that first ride we realized that we had ridden into three separate counties that day. None of us had ever done that before. Now the ride had a name, and a challenge. From then on, the primary discussion at lunch was how to make it to the third county. We had our maps out, we checked the weather, and we bragged about our endurance or whined about tired legs. Usually we made it to the third county with miles to spare. On one miserable tour, given the rain and lack of wind we considered two counties enough. 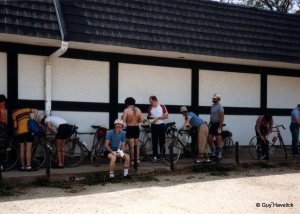 Riders at the end of a TTT, preparing for the long drive home.

About an hour before quitting time, we’d find a bar or gas station and call home, trying to guess where we’d be at the end of the day. Nobody had cell phones, long distance calling was expensive, and who wants to sit around waiting for a phone call, anyway? The designated ending spot was usually a bar. No, not usually … always a local bar. What made it easier for the girls to figure out which bar was the bunch of bicycles parked in front. This is one of those times it’s best that my memory is not perfect. A dozen guys, sweaty and tired after riding fifty miles on a bike, hot and thirsty and in need of fluid. Add beer and wait a couple of hours for the rides to show up. Then watch as the boys tried to load the dozen bikes onto the cars. I can almost hear someone saying “Hold my beer.” 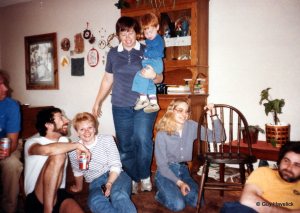 Party after the ride, with spouses and children.

Having decided where we’d meet for the post-party at the planning meeting, we all gathered with the rest of the families at someone’s house, usually Dan, Don, or Guy’s, for a couple of hours of Domino’s Pizza and even more beer.

Those were long days, but nobody wanted to miss them. We had lots of great stories, made good friends, and learned a lot about southeast Minnesota. After each ride I made a point of writing down the highlights of the day and sharing with the rest of the riders. What follows is one of the unedited records of a ride from over thirty years ago.

I cherish the memories of those rides and marvel at the audacity of what we attempted to do. Although we minimized it, there was a lot of planning and preparation to get ready for the rides. We put a huge burden on our wives, who put up with a lot of unreasonable demands. In the end the tradition faded as we could no longer generate the enthusiasm, the time, or the energy to pull off a ride. If there is a lesson to take home from this, it’s to latch on to an idea, wrestle with it, and see if there’s something to make of it. With a little effort it might just become a thing of legend, like the Tri-County Tailwind Tours.

Read on below for my contemporaneous telling of the first TTT.

The first TTT was organized as a fun ride partly to introduce Jerry Berding to bike touring. Other participants were invited. They included Don Fearn, Dan Johnson, and Guy Havelick. The basic idea was to meet at a prearranged place prepared for several miles of leisurely biking. The agreed to place was the Silver Lake Fire Station (a central location). That plan was shattered when Jerry managed to break his ankle the week before in a trail bike accident. The rest of us decided that the trip would be worthwhile anyway.

We met at 7:00 AM at the flagpole in front of the station. The wind was decidedly out of the southwest and strong. Don, Dan, and Guy left the station along seventh street and headed out Valleyhigh Drive. That led into Olmsted County Four. We turned north on county 3. The morning dew was still fresh on the tall weeds in the ditch, forming many beautiful patterns in the spider webs attached to the weeds. Many comments were made about the roadside flora (aluminum cans).

The first stop was the Sunshine Cafe in downtown Pine Island. We had no idea how far we would go that day, but PI seemed like a long way to go before breakfast! After a hearty meal of pancakes or something like that, we stocked up on candy bars and headed out on County 11. The map indicated that it was a poor biking road. It was; Narrow and uphill. That gave way to better roads, we continued north along County 3 (?), stopping in a church yard north and east of Kenyon for a short break. After watering the trees to the best of our ability, we continued on. The first town we passed through was the little community of Nerstrand. We were three very hungry bikers. A quick lunch of hamburgers, etc., was interrupted by a hard fall thundershower. That invited a dessert of milkshakes. After the rain stopped (about a half hour), we continued. The temperature had dropped noticeably and the wind was due south. We headed west and north, still not knowing where we would end up.

The ride started to draw to a conclusion as we passed through Dundas, a small suburb of Northfield. We window shopped at some of the antique stores, but did not feel that the bars were adequate for our needs. Continuing into Northfield, we watched for an adequate bar. There were none, but the air was becoming warmer as the clouds parted. We found a small bar downtown, but decided to buy a six-pack of beer and head for the college. A soccer game was in progress (good game). Plenty of scenery, and a library next door with rest rooms. The librarian did start to get a questioning look when the third person in biking garb came through, though!

Seventy-five miles and eight hours after starting, it was over. Consulting the map at the end of the ride, we discovered the we had crossed two, count ’em two, county lines. Hence, the name TRI-COUNTY TAILWIND TOUR.

We called home from somewhere, Judy Havelick drove Dan Johnson’s Duster (a clunker even in those days) to pick us up. The post party was held somewhere. But not very formal. (Did we even do one???)