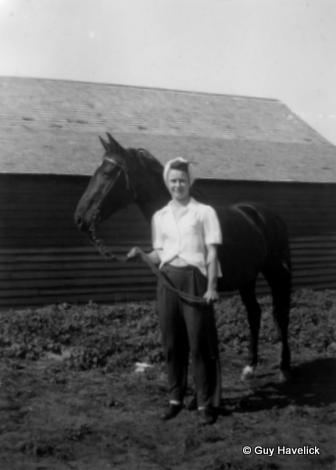 Grace with the schoolteacher’s horse.

I’m going to focus on the musical “talent” Grace focused on in this letter. The horse makes a good story, and her sister Esther has a wonderful story about another horse they owned on the farm by the name of Topsy.

One important difference between my life as a child and my life now as a parent and grand parent is the presence of music. As Grace writes in this letter, she wasn’t much of a singer. There wasn’t much music in the household. She passed that missing music trait down to me as a total and complete lack of musical ability. I like to tell people the only musical instrument I’ve mastered is a CD player.

In the seventh grade all the kids in our junior high school class had to take part in at least one music class. Mine was the “Glee Club,” which I loved. We had a lot of fun learning old favorites. Every now and then I catch myself singing the Caisson Song, or the Happy Wanderer. Try and get that ear worm out of your head now. I’ll wait.

To get into the Glee Club, each of us had to spend a few minutes with the director to figure out which part we could sing. I failed miserably. He played a scale and all I had to do was sing along. I thought he was going down the scale. I was wrong.

Not long after that I got the music bug and tried to learn, but the raw talent just wasn’t there. I’ve had to console myself with the ability to play a CD or Pandora. We have a beautiful old piano played by the grand kids, and Judy’s Irish band practices in the living room regularly. There’s almost always some sort of music happening here.

The year I was in sixth grade two very exciting things happened. The lady who had been teaching our school needed a place to store her piano and board her horse. What kind of a deal Mama made with her I don’t know but we had the horse several years and then had her colt to keep.

I never could sing worth a darn and one of the other girls told the teacher she didn’t want to have to stand by me when we sang ’cause I couldn’t carry a tune so that year I learned how to play the piano enough so I could play the Christmas songs for the program at school. I’m sure it wasn’t the greatest but at least it was better than me singing.

We must have kept both the horse + piano for about four years because we still had them both when I was in High School.

One summer I went to a dance with some of the neighbor kids and afterward I invited them all to our house for snacks and to play the piano. It was a player piano + we had at least a hundred rolls for it and all you had to do was sit and pump to make it play so we were all having a great time. “Yellow Rose of Texas” was my favorite and of course we had to play all the popular ones and I guess it got a little loud. Too bad Mama was sick in bed upstairs and couldn’t stand the racket at two o’clock in the morning. She had Henry send everybody home.

I rode the horse to school during the seventh + eighth grades and we used her some with the cattle too. She was a thourobred from a line of race horses + really loved to race. She could outrun all the neighbors horses without even trying.

Floyd Burman always rode a horse to school too and we would race a lot of times. One time my horse went around the gate post so fast she scraped my leg really bad.

Her colt was a really pretty horse too + Henry trained her for riding from the time she was little. We had to sell her when we sold the farm. 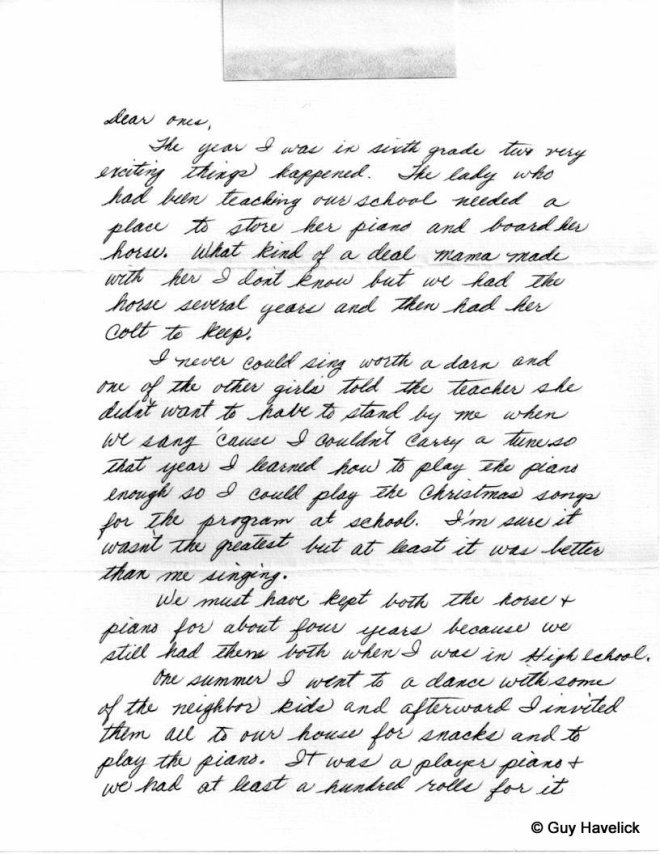 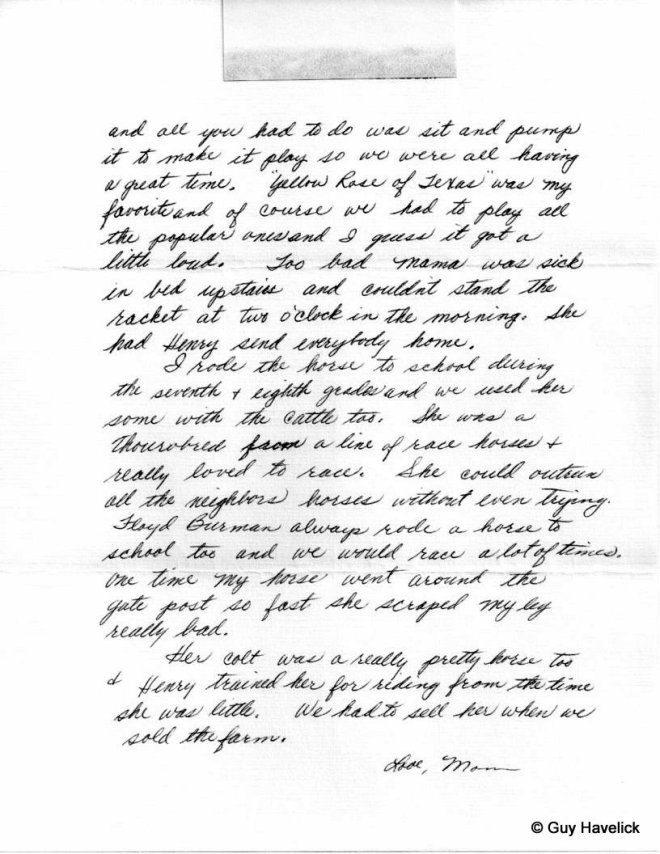