What a garden that was. The Pink House, as we called it, was on a lot along the river, on a short side street, along the alley. When I look at the city plat it’s clear that they had some trouble figuring out how to do that lot, ending up with about the same space that over a half dozen houses occupied across the alley. That left us room for a huge garden, just beyond the rabbit house.

Mom, Dad, and Grandma grew several kinds of vegetables in the garden, and I did love to help. The photo shows me pulling weeds, which I still enjoy doing today. My favorite vegetable in the garden was the kohlrabi. I’d pick one from the garden, pull off the leaves, and eat it right there in the back yard. Nobody I know likes them, so I haven’t tasted one in years.

When we lived at 455 3rd street in Jamestown, we had a garden in which we raised some good vegetables.

Guy could take you through the garden after it started to come up and tell you the name of every vegie there. He was only about 3 years old then – but – if he was missing – the first place you looked for him was in the cucumber patch – he would eat them things right off the stem.

What I wanted to tell you about was one year the potatoes had some real big vines and that was a fair indication that under them there should be some big spuds.

Grace and I were in the garden, I was on my knees scratching under the spud vines to get an indication what was there and how big. What I found was not a spud but a rock. I tore a fingernail off and the pain was something else. It hurt so much that all I could do was whistle, couldn’t yell or scream.

Grace must have thought we had some beautiful spuds if that was the reaction I got on finding one, but when she saw my hand, bloody and me still whistling it was another story.

Then in the early 1960’s we were at Holloman air Force Base in New Mexico when Eric run out the front door, letting the screen door slam back on its own. The bad part of this is that Linn was coming right behind him and had his hand on the doorframe. The screen door slammed on his finger, one fingernail was smashed – blood gushed and he didn’t whistle – just yelled and screamed – then Eric started to scream – could have had a modern day rock record made of that – but never mind.

Took the whole family to the medics and while there the doctor cut off Linn’s fingernail – I told him if he was real brave about what was happening I would take him out and get him a malted milk. We did that because he didn’t flinch once.

Nobody took me out for a malt.

On another note … Louie did take me for a malt once when I was about eight or nine. He and I walked from the house to White Drug, about five blocks, had a malt at their soda fountain, and walked home. That may be my most pleasant memory of my dad when I was a child. 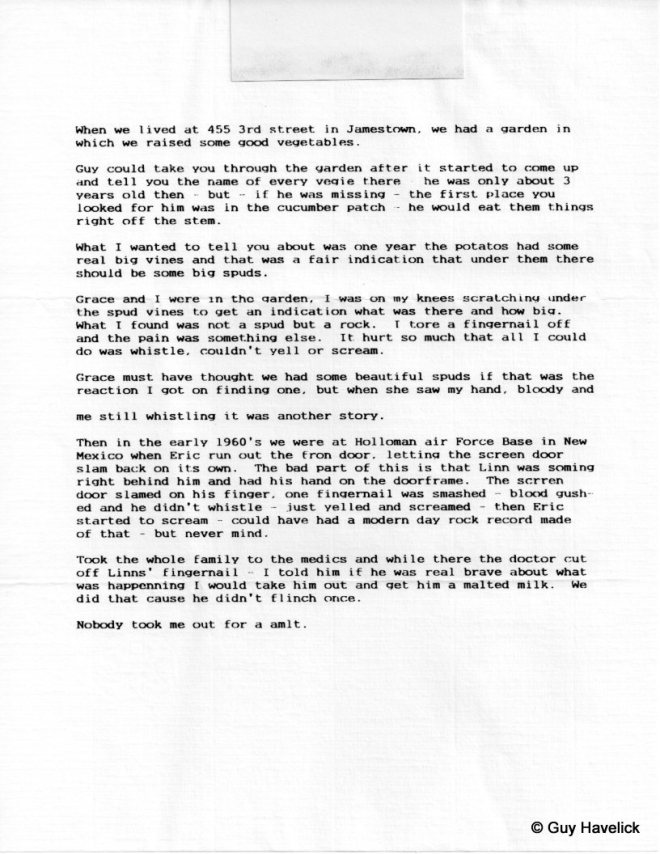