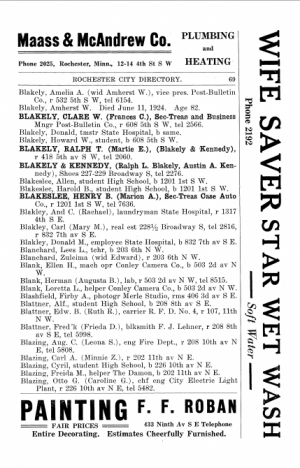 Two things in this letter resonate with me. The first is Lucy’s description of the City Directory. My children may have heard of them, but their kids certainly have never seen such a thing. When I was a kid the City Directory was the first class version of the Telephone Book. The City Directory had much more information, things like who lived in the household and what they did for a living. In a sense, it was a corporate census of the town. I didn’t get to see one very often, as they cost a lot of money, but every business man needed one. They may have been a source to determine credit-worthiness. They disappeared in the nineteen eighties, after a hundred year run. Nowadays they’re a good resource for ancestry hobbyists. They hired unskilled people to make the rounds of homes to gather information; a good entry job for Lucy as she tried to get into the labor market.

The second thing that brought back memories was Lucy’s mention of Main Avenue. When I moved to Fargo in the fall of 1968 to attend North Dakota State University one of the things the guys in the next room taught me quickly was where not to go in Fargo. Main Avenue was one of them. There were some interesting bars down there, not the least of which was the Pink Pussycat. For several blocks along Main there were nothing but bars, the Salvation Army and the Bus Depot. They were not the place for a naïve teenage boy to hang around. The flop house era was just ending in those days, and single old men wandered about, drunk most of the time, waiting for their big break.

For Ken to help those guys out was incredibly charitable. For Lucy to go door to door down there would have been a real challenge.

These last couple of letters from Lucy have been difficult for me to read, and even more difficult to comment on. She came through a challenging time in her life, to come out the other side as a successful and joyful person. She mothered a wonderful girl who became the most wonderful grandmother any child could have. Lucy’s next several letters will lift you up even more than the last couple have dragged you through the nadir of her life.

Being left with a daughter and mother to care for was only the beginning of my concerns. I married out of high school and had never had a real job that paid a living wage.

The first “real” job I had was working for the city directory. You went door to door and got information and for the most part people were so nice. I had no idea Ken knew so many people.

One of the places I had to go was Main Avenue which was at that time, skid row. When I would go in to the bars and cafes no matter how loud things were – everyone would become very quiet and Ken’s name would be mentioned. You see – at the end of the month, they would run out of wine + tobacco money and Ken’s business was just off Main and they would borrow money from him and on the first of every month they would come in and pay him back. They really loved him and 2 pews at the back of the church when Ken died was Main Avenue people.

Somehow their treating me with such respect, I was given a source of confidence which was so lacking in my shyness. It was like I stepped out from behind Ken’s arm and stood on my own. Love and respect does that for me.