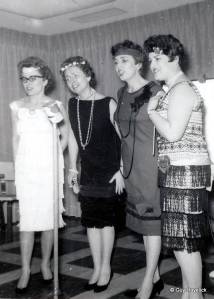 Singing with the Sweet Adelines was an important part of Lucy’s life. In earlier letters, you’ve read about how much it meant to her. Judy sang with SA choruses, too, in Fargo and Rochester. Both of them joined quartets, vying for honors at competitions around the country. In Lucy’s case, they went to Europe, too.

There’s another societal change noted in this letter that needs explaining. Lucy describes her part in a quartet called the “Sugar Beats.” When they formed the quartet three of the gals were single. In this letter Lucy talks about how two of them fell in love and had to quit the quartet, even though they were fun and prize-winning.

Maybe I’m stretching it a bit, but did husbands keep tighter reign on their wives in the fifties? Did they break up the quartet just so the newly married could stay home to cook and clean?

I ask this because even in the seventies being female was a challenge. In 1976 Judy worked for a dental office. The day the dentist realized she was pregnant, becoming obvious by the swelling belly, Judy was out of a job. That doesn’t happen today. I bet women don’t have to quit the chorus or quartet just because they got married, either!

Ken was gone – Judy and I had settled into routine. I decided not to work full time as long as Judy was home and so small.

Ken had decided mother should retire so he built a small appt on the side of our home. It had a bath, kitchen, small bottle gas stove, a small closet and a Hide-A-Bed. After Ken was gone we cut a hole in the wall so Mother didn’t have to go outside to come to my house. She spent very little time in her room after that. She kept candy on her dresser for Judy. She was 72 at that time. I felt it was too bad she had to start raising another at which point she said “She is my Purpose.”

Betty Wroe + I belonged to Sweet Adelines and the chorus had a quartet and Betty said “If they can do it – so can we” so start we did. We had our first quartet with Pauline Argenziano and Shirley Johnason and Shirley got married so we had to start all over.

Dorothy Kraft, Fran Remmen + I formed the “Sugar Beats.” The first contest we were in we placed fourth. The second time first. Oh boy. We got medals, crowns, and we were off. We sang for banquets, hospital benefits, and so many company parties. Elk Show that went to Minot on a special train.

Dorothy + Fran were young and of course they had to fall in love, so we had to start over.

Verna Newell, TV show hostess and very dear friend joined in Dorothy’s place (by the way I was brides maid at her wedding) and Betty Lou, Dorothy’s sister, took her place. And the “Hum Bugs” were born. We sang in Winnepeg, Aberdeem, St Paul, Tucson Ariz (International Competition), all over ND + Minn. It was a chance for me to pay for my hobby and extras for us. As I look back on it, I don’t see how I worked all that in with a job, Judy, family always relied on me for holiday get togethers. 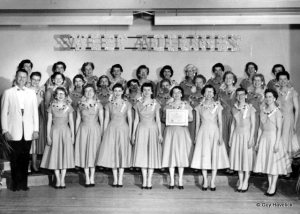 In one of our shows (it was a benefit for the opera co) we were just ready to go on stage and Mr Van Vlessengen had neglected to zip up his pants. I was to shy to say anything, so I told Verna and she said to him “I don’t think you are completely dressed” at which point he turned around quickly and zipped.

One other time I had a hair piece. It came off with the hat we wore in Competition and I sang with a perfectly flat head.

One of the high-lites of my Sweet Adeline experience was singing in Royal Albert Hall in London. A week in London + Pauline + I. I think about 10 days in Europe. That was such a marvelous time I’ll just never forget it.

Now, after 33 years of Sweet Adelines I’m singing in a gospel quartet and a chorus in Pelican Rapids. Betty directs it.

“We’ve sung in every rest room in Fargo!” It wasn’t our goal but it happened. 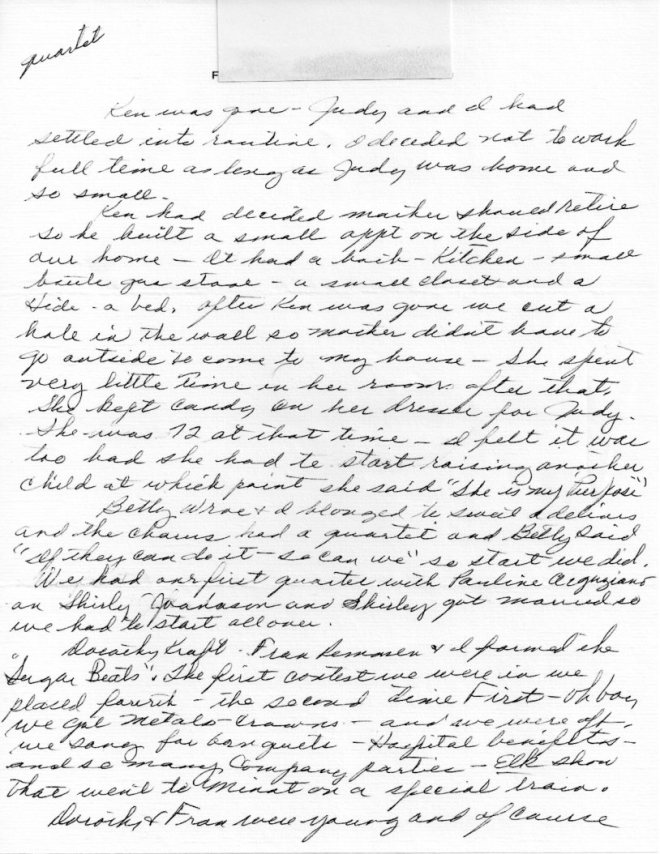