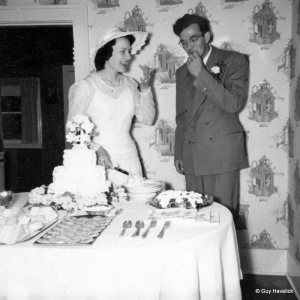 Wedding cake, in the dining room of the Pink House. The kitchen is visible through the door.

In her letter a couple of weeks ago, Grace mentioned that there was an “old-fashioned” refrigerator in the Pink House when they moved in. This week, while writing about her wedding to Louie, refrigerators come up again. That juxtaposition illustrates something about Grace’s character that she learned from her mother. It’s a character trait that she passed on to me. My brothers are afflicted with the same fault: practicality.

Jim and Lucy taught me about love and kindness. Grace was all into making life functional. Some use joy to ease the pains of life, some figure out how to work through the difficulties to make the joy possible. Grace found joy in knowing that her family would be happier if she smoothed out some of the rough edges of life. Smoothed out with new slip covers on the couch.

Grace’s practicality paid off for me. She and Louie invested a lot of time and energy in putting together a wedding photo album and keeping mementos of the day. Being able to flip through the pictures and cards today lets me touch the joy and anticipation they must have felt on those summer days in 1949. The abandon they felt while running around Itasca Park in northern Minnesota reflected on Judy and me as we enjoyed our honeymoon on exactly the same ground.

Grace at the Headwaters of the Mississippi in Itasca Park

We had a small wedding cake with real yellow roses around it. Afterwards had pictures taken at King Studio.

Itasca Park and Minneapolis made up our honeymoon. I wore a yellow pinwale corduroy outfit I had made. Had a jacket, skirt + slacks with white shirts. 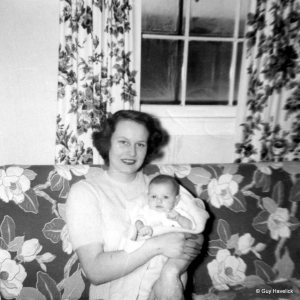 “Mother and Son” Grace and Guy, and her first slip covers

After that we lived there at the pink house with Mama. Louie was working for Yellow Cab. We rode the City Bus a lot for transportation as we didn’t have a car. I got into sewing more for people and made Dorothy Havelick’s wedding dress and also Carrie Lawerence’s, another Hi School friend.

We bought a small refrigerator from Goldberg Furniture and paid for it with quarters that Louie got as tips from driving cab. It had a meter box on it that we put the quarters into. No quarters, no run.

I made slipcovers for the brown mohair couch + chair in the living room. They were grey flowered with rose piping. That was my first attempt at slipcovers + they were really pretty nice. We had those a long time 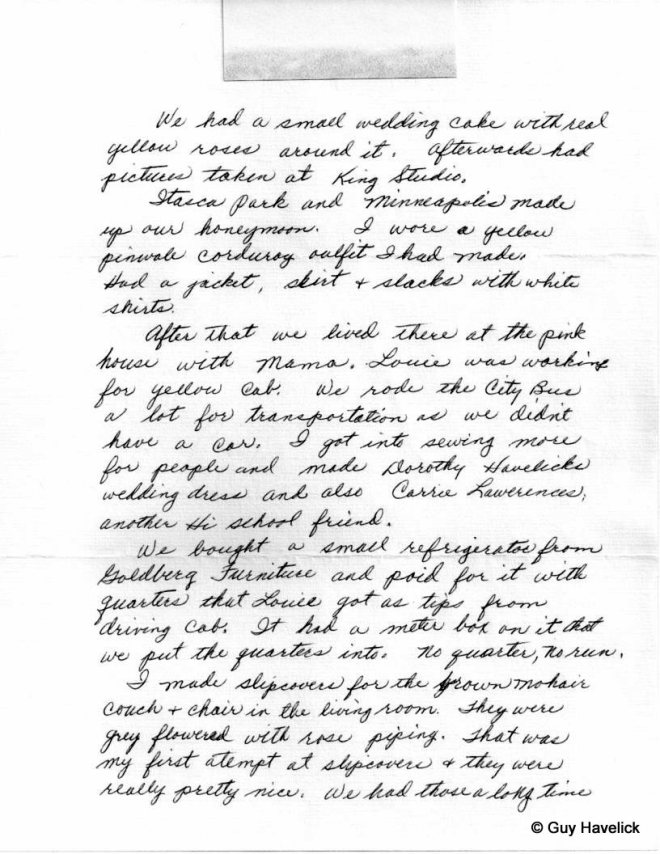