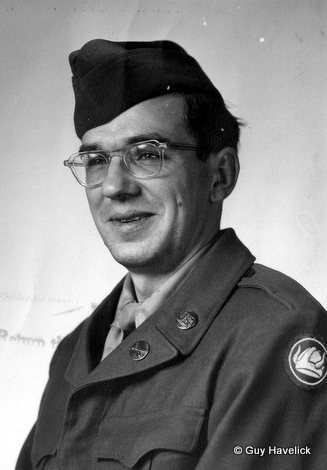 Last week you read the last of the stories Louie wrote in 1991. Louie’s letters end with him meeting, marrying Grace, yielding their first son; me. Grace’s letters end with the same wedding. To the casual observer that may seem strange. To me, it’s not a surprise at all. That wedding may have been the high point of their relationship.

As a child, I was never close to my dad. He spent his time elsewhere. He came home from Korea when I was about three. Louie loved to tell me about his return, he came through the front door and asked “Where’s your Daddy?” I immediately ran to the bedroom and brought out his Army portrait. Touching, in a sad way.

He and I didn’t spend much time together. Somewhere in the mid-fifties Louie took me downtown to White Drug for a malt. White’s was a fabulous place, including the little restaurant coffee shop in the back, a full soda fountain with a counter and all the things you’d expect in a fifties soda shop. The drug store was more of a general store, selling everything from post cards to window fans and toasters. Think Walgreen’s with a coffee shop. That’s where I got a malt with my Dad, one of a handful of memories of good times with him.

After we moved back from New Mexico, leaving him behind,  I didn’t see much of the old man. There were intermittent visits, but the sense was one of disengagement. Louie didn’t show up for the important celebrations of my life; confirmation, graduations, wedding, first-born son, and so on. His visits usually had some quirky overtone, like the time he rode from Fargo to Jamestown in the back seat of our Mustang convertible. That story brings back confused memories even now. Maybe I’ll share it another day.

I didn’t really remember where Louie was for most of the time after 1961. Linn rode his motorbike out to see Louie in 1970. Linn had the foresight to write about his experiences. When Linn and I read the story last year it brought us to tears. We are now at the age where we understand (a little more) the demons Louie was dealing with for those thirty years of absence.

The change came when Louie remarried in the late 1980’s and moved to Gillette, Wyoming. The coal industry was really picking up and Louie heard that he might be able to get a good job. He sobered up at the same time and got in touch with us. In those first tentative meetings, we discovered an undeniable bond between Mara and Louie. Something in their past lives linked them together immediately. They corresponded for years, and found every visit special.

When Mara started using the Internet a few years later the depth of the relationship became clear. Mara chose the AOL screen name “sunniejane.” I didn’t know where that name came from, but Louie and Mara quickly filled me in.

Before Grace and Louie met in 1948, he had been married to a beautiful young woman by the name of Mary Jane. They had a daughter who lived for less than a week. The marriage didn’t survive the tragedy. The baby’s name was Sunnie Jane.

For the last twenty or so years of Louie’s life we became quite close. He came to Rochester for confirmations, graduations and other family celebrations. I loved that developing relationship, with so many visits and family memories. Probably the biggest disappointment of those years came when Louie was not well enough to join us for Mara’s wedding. He would have been so proud and happy to be present. I wish there would have been a way to make that trip happen.

Louie had a life so unlike mine, he lived through a long dark period surrounded on either end by good times. The stories of Louie’s early life, and the personal experiences with him in the last third of his life, bring me great joy.

Linn’s recollections of his trip to Utah? Watch for it next week.

Thanks for reading Louie’s letters. Narrating them has been a wonderful experience.

One thought on “Louie goes Rogue”