Jim worked with a lot of people at the NDCUL, including a team from Uganda.

The new job at the North Dakota Credit Union League was exciting for Jim, and that excitement shows through in this letter. This was where he belonged. He became the expert, traveling the state to help people organize and run credit unions.

As mentioned in earlier letters, I learned a lot from Jim’s job at the league. He showed me how to deal with people, teaching both by example and through evening conversations during commercial breaks in the Red Skelton Show. Jim dealt with a lot of people, some nicer than others. One of the nicest people worked as a secretary at the league. Judy was just a couple of years older than me (and drove a hot 1957 Chevy).

Their special relationship lasted from that first meeting in the office to the end of his days in 2007. Watching them helped me understand how to treat other people, especially a woman who deserves love and respect. Jim was part of Bob and Judy’s wedding, a guest at their holiday meals, part of the children’s celebrations, and a friend for life. Jim had us in Rochester and Judy’s (not my Judy, the other one) family in Jamestown.

He was one lucky man.

The Director for Personnel of the State Employment Service was also the Treas. of the IAPES Credit Union in Bismarck. Even tho he knew I had been hired by the league some two months prior he called to inform that I was still on the register and that there were several openings in the state for interviewers … would I be interested in Valley City at $430 a month? Now they tell me! Again I was in a quandary!

This offer was $80 more monthly than I was presently making … but I had just taken this job … and I had a certain loyalty to consider. Somehow word got out about this job offer and to my surprise at the Jan 10th league board meeting my salary was upped to $450!!

My quandary was rapidly resolved… Bismarck said they would retain my standing on the register and keep in touch. Then shortly thereafter the Air Nat’l Guard at Fargo had an opening … that I also declined. It was a relief to have all this off my mind… I could now concentrate on doing the job I was hired for.

1966 was a whirlwind year for me. In less than 4 months I traveled more than 10,000 miles in the state … Helped organize two credit unions, one at Ft. Berthold Indian Reservation and another at Drayton for the sugar beet plant employees … plus meeting with managers and volunteers.

One of my first trips was to the Beach C/U (out on the western edge of nowhere) it was a very small, with about 100 members and $20,000 or so in assets … they were excited to see me … I was to show a movie and say a few encouraging words. The room was small, crowded and hot with some 30 people jammed in … after making sure the old projector was threaded correctly, the room was darkened and I hit the lights … I became so engrossed in the movie (one of those I hadn’t seen before in the office) I forgot about the steady whirring of the projector … Toward the end of the movie I glanced at the take-up reel and there was nothing on it! To my horror and chagrin all the film was casually piling up on the floor at my feet!

The film was dumped in a paper sack and I couldn’t wait to get out of there! Oh, incidentally, we all enjoyed the film!

Some highlights of 1966 … Flew to Nat’s Hdqtrs in Madison, Wisc for two weeks of training and rode the train back due to a strike. Guy and I drove to Lake Metigoshe for a wet, normal weekend of camping … moved into an apt. at 1102 3rd Ave NE, replete with a fireplace. Guy was with me a great deal that year. John Hillerson owned a small four place, single engine, high wing plane called a “Maule” … the fuselage and wings were fabric covered but the engine cowl was metal … we flew to many meetings … once at Bisbee we buzzed my folks farm and then landed in what seemed like a pasture … when we set down I thought we had crash landed it was so rough! 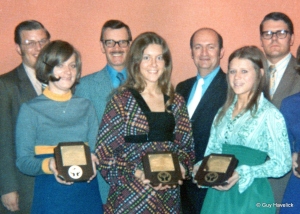 Some of the NDCUL staff. Jim and Don C in back center, Judy N in front left.

Between traveling constantly, weekends with the Air Guard, trips to the farm with Guy and camping … the summer flew by! In early Dec. broke my wrist in a fall on the ice … had a cast from the fingers to above the elbow … Thankfully, Guy was always there to help me! Judy Neukircher came on staff as a sec. and also sported a cast on one leg! I immediately fell in love!

Dec 20th Guy moved to Denver with his brothers and Mother but he returned in Jan. to stay with Grandma and finish high school and if that wasn’t enough for one year Hillerson resigned after twenty one years as Managing Director of the League!