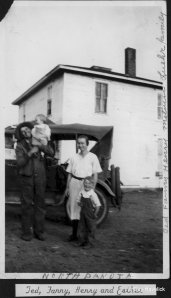 The family on the farm, with two of the four children.
Ted, Fanny, Henry & Esther

Life in the Great Depression was tough. My maternal grandmother lived through the “dust bowl” years on a farm in the middle of North Dakota and raised a family. She also played a major role in raising me in the middle of the last century. Grandma Fanny loved to tell stories of her successes and trials during that time on the farm.

When I went off to college just a hundred miles away I often came home to visit Grandma and friends in Jamestown. That meant listening to her stories. Again. There were perhaps two dozen stories about cars, chickens, and school. I didn’t want to listen to them again.

Grandma had a way of repeating those same stories too often. She lived in her past. It was a great place to live. There were active people and challenges to face, but I didn’t want to listen to that story about Grandpa Ted selling fencing one more time. She had to tell it again. As my grandmother would talk, I’d do something else. Read, watch TV, anything but listen. How many times did we have to listen to a story or two that she had to finish, and we were in the bedroom, in bed, trying to escape by feigning sleep?

The day finally came when the phone rang with the bad news. After eighty-nine years on this earth Grandma was gone. As a family, we really miss the old woman, even though we were happy to not have to put up with those damned stories again. Some years later it occurred to me that those all too familiar stories were fading from my memory. Those stories were Grandma! After actively avoiding the stories for years, I had succeeded in walling them out of my memory!

I was devastated. No way could I let this happen again! I concocted a scheme that, as I look back on it, was quite the demand on my elders. I asked my mother (Grace), father (Louie), mother in law (Lucy), and my dear friend Jim to write a series of stories of their life growing up. Wow, did I ever learn a lot from those stories. They had never shared most of them! Those papers are now among my most treasured possessions. As I enter the third year of retirement, it came to mind that it is now my turn to share some of my stories, even if the next generation doesn’t care to listen. Their time will come, and if not … well, this is fun for me, too.

My parents and others seem to have been driven by stories. They had great stories. Grease on the railroad tracks. Rides in the back of police cars. These letters from Grace, Louie, Lucy and Jim tell some of those stories. My stories are a little more benign. After deciding to start this blog based on what guides my decisions I found a stack of paper in an old file cabinet in my home office. Back in 1993 and 1994 I had started writing  my stories, even as our parents were writing theirs down for us. My stories never went anywhere. They will show up in this blog, perhaps making a point or just providing entertainment and a window into who I am.

With luck, these stories and opinions will be kept in a drawer somewhere for a young boy or girl to find, read, and discover what life was like back in the middle of the twentieth century.

Send an email if you have comments or questions.

One thought on “About this Blog”