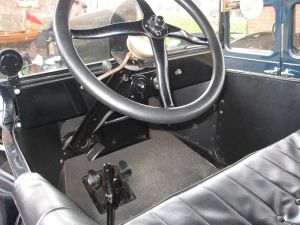 For years Judy and I were members of the local chapter of the Antique Automobile Club of America. Our car, the 1953 Cadillac, was one of the newer vehicles in the club. Several members owned Model T Fords, including Peter A. On one tour, while we were having lunch at the county historical center he allowed volunteer club members to drive his Model T.

What a hoot! Those of us unfamiliar with the vagaries of such an ancient vehicle had trouble believing that anyone could learn how to drive such a beast. Everything Jim mentions below is absolute truth. Steering was difficult at best. Perhaps Jim was too young to notice, but to me the foot pedals were the most confusing part of driving the car. They were nothing like a modern vehicle. Today’s cars have an accelerator and a brake pedal. Not the T.

From the left, pedals include the high/low clutch (push in to start, then let it out when you get to speed), the reverse pedal (press to go backwards), and the brake (note that it’s on the right, unlike the car you drive). Then there’s the emergency brake / clutch release lever. The whole thing reminds me of the class we took on how to Rumba. My feet are still dizzy.

All the farm work was done with horses; plowing, planting, tilling, cutting hay, raking, stacking and hauling. The year before we sold the farm (1930) we had a hired hand. He went by the improbable name of Willie Handy. I can still see him now …