Every now and then we get to hear more about a story. One year, long after Grandma Fanny and my mother Grace had passed away, my brother Linn and I traveled to Oregon with Grace’s photo album to learn more about the family history. It was an incredibly satisfying trip. Esther, Linn and I sat with the album for days looking at each picture. Esther would start talking, Linn would ask some questions, and I’d do my best to capture what they were talking about.

One photo was of Skippy the dog. Esther had fond memories of this little dog, just like Grace did. Here’s what I wrote down that day, capturing the story from Esther’s point of view.

I don’t remember where he came from or exactly when he showed up on the farm, but he was a pretty puppy. He weighed in at about sixty pounds in his prime. He was a solid, muscular dog, mostly terrier and some bulldog. He could be aggressive if he didn’t like you, and nasty when necessary. He didn’t like the guy from the farm to the west. Whenever he came to the property we had to restrain Skippy, tie him up.

One winter Grace made a fur collar coat for Skippy. He was a short-haired dog and got cold in the North Dakota winters. She started with a woman’s medium blue wool coat. She measured the front legs, fit it over the back and to the tail. It had buttons and a collar that fastened under his chin. The dog liked the coat and asked for it when it was time to go outside during the winter.

That’s one version of the “Skippy Story” and it’s completely different, but exactly the same as the one Grace tells below. I’d love to hear Grace’s version of how she made the coat for Skippy, but that one is lost to time. How many stories do we need to hear before the complete truth comes to light?

Skippy came to live with us when I was ten. He was the first dog Mama ever allowed in the house. Guess she couldn’t resist that cute little golden tan + white puppy. It may have been in the winter, too – otherwise I can’t imagine why she would have let us keep him in the house. He grew up being loved dearly by the whole family. Henry made a little harness for him so he could pull the sled. He would get so excited when we’d put our skates on the sled + harness him up to go skating down on the lake.

One time in the spring … END_OF_DOCUMENT_TOKEN_TO_BE_REPLACED 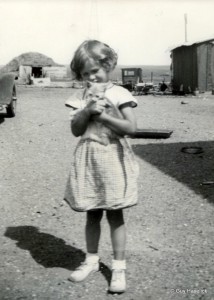 I’ve always been a cat person, and for most of her life Grace was, too. This story focuses on a cat that lived on the farm for a long time. Dandy was the animal that Grandma Luehr told us about many times. There are a lot more stories about Dandy that I just don’t remember. When I was a kid we had several cats that looked a lot like Dandy, but they weren’t quite as friendly as Dandy appears to be in this story. The pet’s name that comes to mind is Mr Jinx. Sadly, I don’t remember any stories about him.

I remember one time when I was a little kid there was so many toads. There must have been thousands of them as they were everywhere. Most years we would see one or two in the garden but this time was something else. END_OF_DOCUMENT_TOKEN_TO_BE_REPLACED

Grace is in the back row, third from the left.

The changes over the last one hundred years amaze me. Then this letter shows up and twists my understanding even further up the amazement scale. A general observation that things change is pretty banal. Once I hear about a specific change  in detail, in a way that I can relate to, it gets personal. In this letter Grace tells us about the one room school-house on the prairie. They were all over North Dakota in the nineteen thirties. Did I say one room?

Then there was the school-house Grace went to. Two rooms. Maybe you can detect a little pride in her description of the school building and grounds. That school yard had everything a school girl would want, including the flowers that Grace described in another letter.

She didn’t describe the interior of the classroom. That’s something I’d love to hear more about. Last summer during the local Irish Fest at the History Center Judy and I attended a talk about bodhráns. The talk was in the one room school-house on the center grounds. Wooden desks nailed to the floor. A world/USA map hanging from the wall. A chalk board on the front wall, next to the American flag. A pot-bellied stove and a table in the front for the teacher and you’ve got it covered.

Compare that to school rooms today, with smart boards and iPads everywhere. The kids have a cafeteria, gymnasium, library and much more. And we still think it’s not enough!

Our schoolhouse was probably one of the biggest in N. Dak. The pioneers from two townships had gone together and built one with two rooms instead of the conventional one room you see all over the midwest. END_OF_DOCUMENT_TOKEN_TO_BE_REPLACED

For most of us the first apartment or house after leaving home is a difficult transition. I’m having a little trouble getting my head around this story. Lucy talks about a terrible apartment, then goes on to describe a situation that none of us would accept as a place to live, even if we did own it.

When Judy and I moved into our first apartment we thought it was perfect for us. We rented the upstairs in a house built in the 1920’s. The rooms were large, with plenty of nice windows, and a full kitchen and bathroom.

Looking at the picture of the old house now, one thing strikes me right away. It’s a four-square, bearing an uncanny resemblance to our house in Rochester where we’ve lived for the last thirty-something years. There’s a lot of similarity to the house I lived in in Jamestown, too.

Enough about me. Let’s get back to Lucy and her home.

After living in Terrible apartments we decided it was a necessity to have a home. END_OF_DOCUMENT_TOKEN_TO_BE_REPLACED

Fanny (Grace’s mother) could make something from nothing. That may be hyperbole, but this story from Grace certainly makes it sound like absolute truth. If creativity wasn’t the main skill, perhaps good old-fashioned horse trading showed off her skills. Grace learned sewing from Esther (her older sister) and Fanny. That gave her an appreciation for well made good-looking clothes. Several of Grace’s stories show her satisfaction with their ability to create beauty from whatever came through the farm-yard.

I do my best to reuse, re-purpose, and make from scratch, but there’s only so much you can do with an old iPhone.

Bowerman’s lived one mile east of us on the farm just to the north of Kunkel Lake. When I started in first grade Galen and Bruce were in the seventh and eighth grade. They drove an old Model T Ford the 3 1/2 miles to school and would pick up Melvin and I. One day when it was real cold they had an old imitation fur coat covering the radiator to keep it from freezing.

END_OF_DOCUMENT_TOKEN_TO_BE_REPLACED 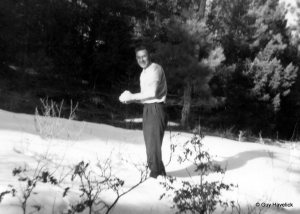 I should have published this letter last winter when memories of snowball fights were more timely.

Winters in Jamestown were incredibly cold and the snow drifted pretty high. When I was a kid it seemed like every winter had snow drifts higher than my shoulders. Does that happen any more?

During snowball fights we tended to stick with snowballs, the other option being ice balls. My friends didn’t want to get hit by one of those. Some of them would throw them anyway, not caring what happened to me.

Have you read that list making the email rounds on the Internet, the one about all the stuff we did as kids but we somehow survived? They mentioned the lack of seat belts and helmets, but getting hit by a road apple was not on the list. Perhaps it should have been. Maybe Louie would have added it.

North Dakota had some very cold winters, so cold that it seemed that everything froze. including cow and horse droppings.

END_OF_DOCUMENT_TOKEN_TO_BE_REPLACED 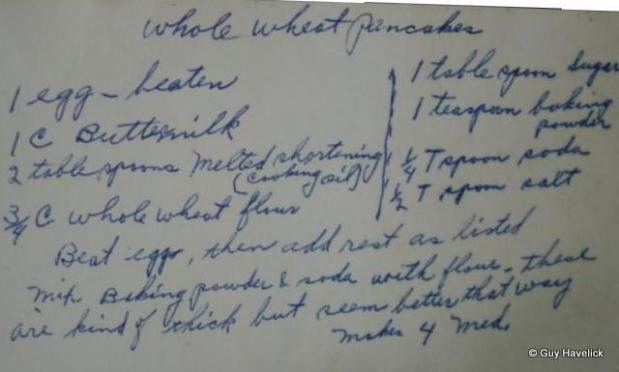 The house in Steele where Grace boarded.

The one thing that jumps out from this letter is the comment about going to school twenty-three miles from the farm. That was so far away Grace rented a room to stay in town during the week. In today’s world, in fact in my world of high school, 23 miles was not a big deal. How many of us think nothing of going out for dinner or to a concert that far away, and drive home in the middle of the night, in the middle of winter? Many of you commute farther than that every day. Transportation has improved a lot since 1936.

My first two years of high school I went in Steele. We lived about 23 miles from there, so I stayed there during the week. In my freshman year I roomed with Ruth Marston and shared a room with a girl from Dawson who was a year older than me.