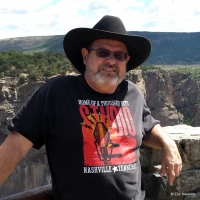 I was living on the money I collected from my 401K accounts when I left RMCI and some small unemployment checks. Things were getting more desperate by the day. We had worn out our welcome at Anke’s friends house and moved into an old metal trailer home in a poor neighborhood south of Dallas. The trailer was in such sad shape that when it rained, we had to set pans around in different rooms and in the hallway to collect rainwater, the ceiling leaked terribly.

One day while working out in the yard, I accidentally put my hand into a fire ant mound. Painful experience. My unemployment checks and savings were rapidly disappearing, and I was becoming more and more depressed. If I didn’t find work soon, we would lose the trailer and what little we had left. In effect, if things didn’t change soon, we would join the ranks of the homeless. It is hard for me to say, but I was at the end of my rope and very depressed.

END_OF_DOCUMENT_TOKEN_TO_BE_REPLACED

There’s that question parents and uncles ask kids. “What do you want to be when you grow up?” We all ask it. Kids don’t have a clue. Parents aren’t much better at giving advice. The job choices I had won’t exist for my grand children. Today’s process of getting a job bears little resemblance to what I went through. What I’m trying to say here is that parents have no idea what a kid should do. In the end, I’m not sure anyone has very good advice. My mother thought I could be a good TV repair man. Judy’s grandmother thought I did something with telephones. What would I be when I grew up?

I rewrote this post several times. All I wanted to do was describe how I chose two jobs that were important to me. Describing those two choices was difficult, more than I thought it would be. It’s hard to find similarities between the two jobs. More importantly, neither job was anywhere near what I thought was a possibility, but both were exactly what I wanted to do. One relates to my many experiences with the medical establishment, but let’s start with my early time at IBM.