Last week while we were out of town, the news arrived that my Aunt Esther had died. She was my mother’s older sister.

You might say that Esther was my favorite aunt. Maybe that’s because my mother learned so much from her sister. In a future letter from my mother you’ll read about how Esther taught her how to sew. She was always there when something needed doing. It seems that Esther was always around when the important things happened. The move to New Mexico. Buying the house at 319. I was too young and unaware to understand, but perhaps this is what a big sister just does? I think so.

Those two girls were alike in many ways, but different in just as many. It was clear that they were sisters. The older one was maybe a little smarter, picked up on nuances quicker, and appeared to be a little more successful at most things. Sometimes the successes were trivial, other times wonderful.

Esther at business college in Fargo

Our grand mother was proud of her daughter. The small example I remember clearly is when I learned how to fold a letter to fit into an envelope. Grandma made it clear that it was my Aunt Esther who, while in business school in Fargo, learned the right way to fold a personal or business letter . If you didn’t do it right there would just be a bunch of paper wadded up in the envelope.

One year Esther came through Rochester and demonstrated what I thought was the epitome of success. She had a small van outfitted as a camper, and was traveling across the country visiting friends, usually staying with those friends or family. She was doing what she wanted, on her schedule, with the people she liked. If that’s not successful, I need to get educated. END_OF_DOCUMENT_TOKEN_TO_BE_REPLACED 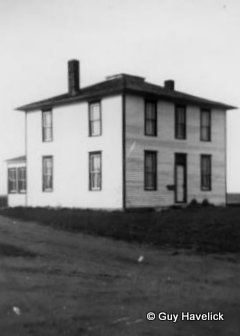 My maternal grandmother lived through the “dust bowl” years on a farm in the middle of North Dakota and raised a family. She also played a major role in raising me in the middle of the last century. Grandma Fanny loved to tell stories of her successes and trials during that time on the farm.

When I went off to college just a hundred miles away I often came home to visit Grandma and friends in Jamestown. That meant listening to her stories. Again. There were perhaps two dozen stories about cars, chickens, and school. I didn’t want to listen to them again.

Grandma had a way of repeating those same stories too often. She lived in her past. It was a great place to live. There were active people and challenges to face, but I didn’t want to listen to that story about Grandpa Ted selling fencing one more time. She had to tell it again. As my grandmother would talk, I’d do something else. Read, watch TV, anything but listen. How many times did I have to listen to a story that she had to finish, with me in the bedroom, in bed, trying to escape the story by feigning sleep? END_OF_DOCUMENT_TOKEN_TO_BE_REPLACED