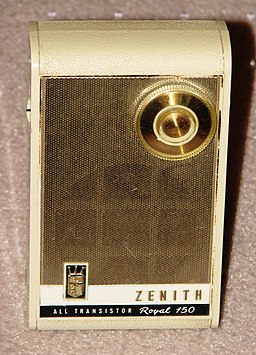 Radio was different in 1961. I had a brand new pocket transistor radio.

According to Wikipedia, the radio probably cost me about twenty dollars. Adjusting for inflation, that’s well over a hundred of today’s dollars. My memory is foggy on where the money or the radio came from, but having one of those little Zenith radios says something about my interest in technology.

Jamestown had only two radio stations in those days. KSJB and KEYJ. Both are still on the air, but now there are many more. That summer I listened to a few baseball games, but they didn’t hold my interest. Roger Maris was almost a local boy, but that wasn’t enough. KSJB played top ten hits, which did catch my interest. I collected their weekly Billboard Top Ten sheets for years, saving them for decades. It took a while for me to get my first RCA 45 RPM record changer, which allowed me to start buying those top ten records. Nat “King” Cole got the honors of the first record I ever bought: Those Lazy Hazy Crazy Days of Summer.

KSJB had much more than music. One of my grandmother’s favorite shows was the Reverend N.E. McCoy. He preached in the small town style. No asking for money, as not many people in our town had much for money. Most important, from Grandma’s point of view, was McCoy’s hospital visits. He would make the rounds of the hospital in the morning, visiting with all the patients, then give everyone in town an update on his noon-time radio show. From what I know about privacy and HIPAA laws, he wouldn’t have much to talk about today. END_OF_DOCUMENT_TOKEN_TO_BE_REPLACED