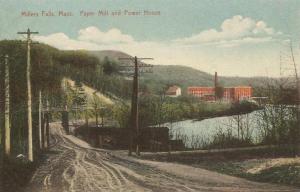 There are some stories I’m just dying to know more about. This is one of them. I’ve never been to a seance or even known someone who has been to one. (Although I now realize that Jim was one of those who had actually taken part!) As we’ve seen, Jim was not one for religion or even spirituality. He embodied all of the teachings one typically learns in church, but he never enjoyed setting foot in one.

Many of the other letters from Jim reveal his love for being at the lake, driving around in the boat, sitting at the dock with a glass of beer or whiskey, or just relaxing on the deck with a good mystery. Since there weren’t any lake experiences in his North Dakota childhood, maybe this is where he got his love of the lake? Sadly, he’s not around to ask any more.

Jim certainly instilled a love of the lake and a love of camping in me. This letter gives me some inkling into the history of that love.

Sometime in 1941 Dad married his fourth wife, Flora Judge. She became my third “mother” or stepmother. I never knew …

END_OF_DOCUMENT_TOKEN_TO_BE_REPLACED

One of the things in life I’ve rarely taken the opportunity to do is read a book twice. Even studying was difficult for me, because reading something the second time was really boring. There have been less than a handful of books that made it to my “read again” list.

Working on these letters from Jim for the blog has reminded me of the necessity of rereading things. It’s been over twenty years since Jim (and the others) wrote the letters you find in this blog. I have forgotten so much of it, only to once again be reminded of the seriousness of life during and after the Great Depression and World War Two. The difficulties of those times played out in the lives of everyone. In Jim’s case he struggled with what to do with his life, enduring far more struggles than most of us. He had challenges thrust upon him and he made some bad choices. The end of the letter gives the reader hope that the later choices that made his life so good will finally become obvious.

When I was fifteen Dad explained to me that my natural mother was alive and throughout the years he had been in contact with her regarding me. He was patient and explained in detail how I came to be adopted and all the reasons leading to it. To suddenly learn that I had been adopted and that my real mother was still living was confusing and difficult for a fifteen year old to grasp. …

END_OF_DOCUMENT_TOKEN_TO_BE_REPLACED

This is an exceptionally difficult letter to read. Growing up during the Great Depression must have been tough. We’ve all read Grapes of Wrath, but this was someone I knew and loved. It was no longer an abstraction. These days we look at the tension between Sunnis and Shia and wonder how they could be so intolerant. Not that long ago that tension was right here. Catholics vs. the Baptists. Those fights existed when Judy and I were growing up, but not to the extent that we ended up on the bottom of the pile.

The instability of life can have a great influence. In Jim’s case, it looks like being adopted out, forced off the farm, then a succession of step mothers and being literally farmed out led him to the Navy and the best practical education his generation could have had. Somehow he came out of all those difficulties as a loving and generous person.

The travel bug certainly bit Jim hard. He was always dreaming of going to places that were just out of reach. When he was working at the North Dakota Credit Union League in the late sixties they partnered with Credit Unions in Tanzania. Jim was in his prime talking to the folks from Africa. He wanted to learn everything about the place. He even named his basement rec room “Dar Es Salaam,” “Here is Peace.”

In the spring of 1931 we made the trip from Flaxton, ND to Mass. The big Olds sedan survived the trip, despite being heavily loaded, and I think I was the only one sorry to see the trip come to an end! For me it was the greatest adventure I’d ever had. From that time on I would be bitten with the urge to travel to new places. …