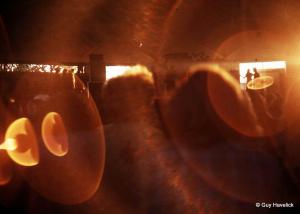 Muddy Waters, live and in person at the Minnesota State Fair, 1972.

Muddy Waters! Live, in person, at the Minnesota State Fair. What an opportunity. My friend Mark had invited us to stay with him for the weekend, take in some sights around Minneapolis and spend an evening at the fair listening to Muddy Waters. Let’s go.

1972 had been a great summer. I completed my bachelor’s degree in engineering. The engineering department awarded me a full ride scholarship for graduate school. The summer job working with George taught me a lot. We even traded our old car for one a little more fitting for a young married couple. Maybe it was a better fit for a twenty-one year old male with raging hormones? A 1964 Mustang, complete with the big engine, a Hurst four speed shifter, cherry bomb mufflers, and a rag top. We loved that car, with some reservations. (More on that in another story.)

The Interstate highway system construction was almost done. From Fargo to Minneapolis was mostly easy four lane freeway, with just a couple of jaunts on the old two-lane highways. As we got closer to Minneapolis, we ran out of freeway, just west of where the 494/694/94 flyover bridges are today. We got dumped onto a two lane road that had more traffic than I liked. The Mustang didn’t like driving slowly, in a straight line, driving nose to butt in heavy traffic, so we took a little detour south, away from the traffic. We wanted to get to the city faster.

How quickly can I get lost? It only takes one wrong turn, and we were driving around somewhere near Lake Minnetonka. It’s beautiful country, but it was getting late, we were tired and had no idea how to get back to the main roads. Fortunately we had stopped at a rest area to pick up a free map of Minnesota. The state updated maps every year, and with the road construction on Interstates moving along so quickly it was important to keep up to date with the maps. They were still out of date.

There was a long straight stretch, so Judy showed me the map, and we tried to figure out where we were. It’s not that easy to find yourself in strange territory. There are so many roads, and they all have straight sections and sharp curves. Both of us were now reading the map trying to find out where we really were. END_OF_DOCUMENT_TOKEN_TO_BE_REPLACED